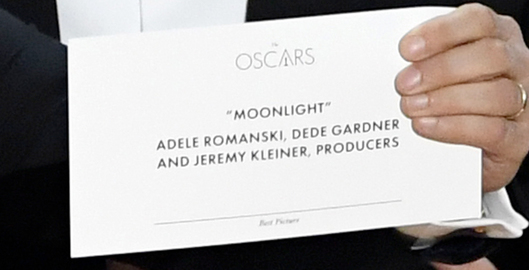 Amidst all the disaster and gaffe precautions the Academy Award ceremony attends to, apparently human error prevention (while the world cliff-hangs on your next cold read) isn’t one of them. If only a graphic designer had been tasked to apply one of their most essential skills, basic typography, Warren Beatty might’ve caught the error on the spot.

Let’s have a look at the interface he was tasked with navigating, stone cold. The first (and largest) item commanding attention is the most useless: the Oscar logo. Perhaps this would be useful if a major star ‘Gary Busied’ and suddenly forgot where they were. Next, as if to avoid getting stuck in the traffic of “more words” we leap headlong into the title of the film, with no mention of category. Do they figure they’ll shed precious time unclaimed by the flashing “wrap it up” sign and play-off music? Sometimes formalities are appropriate. Particularly if the award ceremony is, you know, significant. Finally, the category the reader is announcing for is buried at the bottom in small print, italicized. For “emphasis”.

Here’s a version an experienced graphic designer would insist upon, that is if only one of the trillion or so designers in LA had been available. 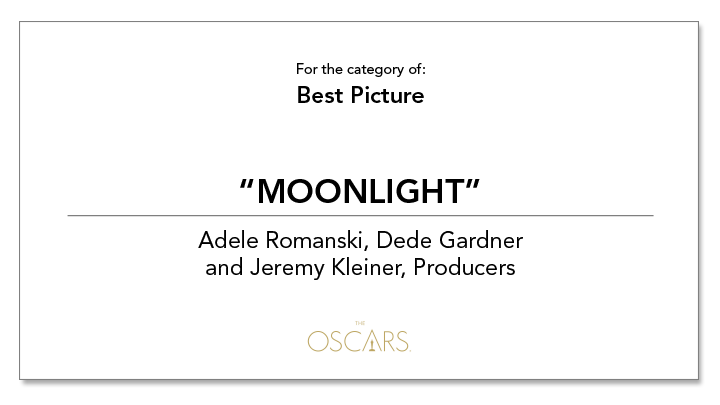 Only the bare minimum is employed to ensure clarity in the event Murphy’s law barges in. Then it’s organized into a simple, intuitive hierarchy. From the top, only a split second glance is required to check the category (a sort of “you are here”). This is the “ounce of prevention” that could’ve saved Beatty, the Academy, and PwC from many pounds of embarrassment. Then the main point of focus, the film title is handed to the reader by way of its emphasis. Underneath it all (with the exception of the film title) is the beautifully invisible feature of readable, lowercase typography. Unlike the all-caps Oscar card, lowercase type recognizes we humans read the shapes of words, not the letters of words.

So shape up, Oscars, and stop giving Gaffers a bad name.